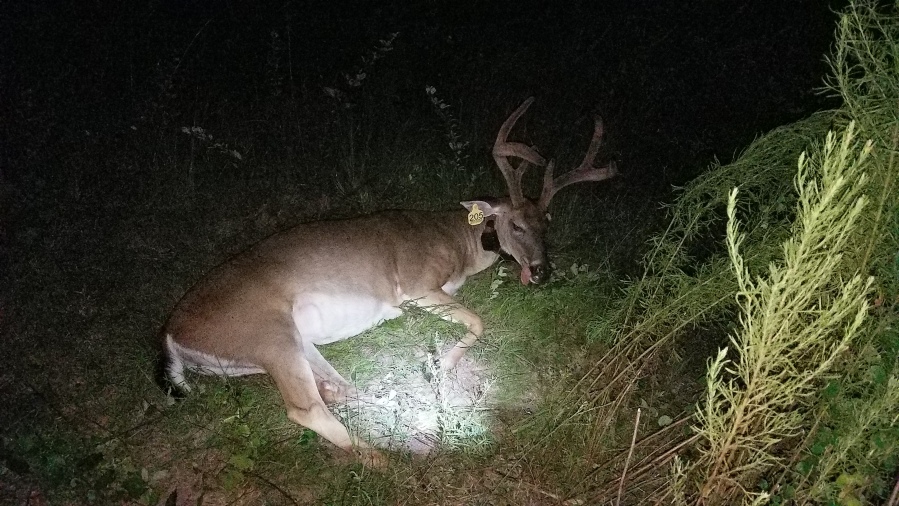 We caught another buck last night. I guess the .389 is going to work for me after all. I had been reluctant to shoot it since I’ve always been the driver and it’s essentially my boss’s gun. The settings and buttons on the gun make it much more challenging. My boss is very proficient with it so why bother, why change things. Well, my boss has been busy and is going on vacation so we’ve had to step it up some. We hired an extra hand, who is very capable, to help us but also to conduct a larger portion of the study, a large camera survey.  Like I said yesterday, my preferred darting gun for deer capture is the X-cal, an air projector. However, our darting spots, locations where we bait up deer and shoot them from a tree-stand, haven’t been working well at all. We have a rather serious wild pig problem for one, and I think 15 yards is too close in August. The weather this time of year is hot and humid and based on some nights we’ve tried to hunt, the deer are smelling us and know we are there. We climb pretty high in the tree and it’s dark. We’ve had a few instances already when the deer were coming but then stopped short of going to the bait pile, which is where they need to be for a 15 yard shot. Perhaps this time of year our scent falls to the ground more compared to the winter. I don’t know. We’ve sighted in the X-cal to 25 yards now and are in the process of adjusting our bait sites according to this new yardage. Perhaps that will work.

Last night’s buck was much bigger than 2 nights ago. He weighed ~190 lbs, perhaps a little more than that too. We don’t use a scale, it’s too difficult to bring one with us when we track to a darted deer. We estimate the weight. He was at least 3 years old and a 6 point. I made a good shot and he ran off ~ 300 yards which is a long ways for a darted deer. It’s probably among the longest we’ve had one run off but he was also among the largest bodied deer I think we have captured. He was big. In addition, the injection may not have been enough. He was moving and twitching a lot and knew we were present but couldn’t do anything. It was unnerving as time passed as his movements increased and breathing changed so we rushed things a bit. I normally don’t worry with a 100 lb doe, we’ve handled hundreds of those, but a 190 lb buck with antlers is different. I’ve seen deer just get up and start to run off during or prior to our workups in the past. We made the collar very loose on this buck and had to actually add an extension to the collar due to his size. A mature buck’s neck will swell up during the rut.  Also, a buck can lose a lot of weight later on after the rut in the winter. You can’t make the collar too loose because it could slide over his ears and that’s the end of data collection on that deer.

Here’s a photo of him. This was the largest-bodied live deer I have ever handled.

I'm a professional wildlife biologist. I work with a research wildlife biologist on birds, deer, coyotes, wild pigs, and coarse woody debris. I've always been interested in nature, I would explore my neighborhood when I was boy looking for deer tracks and secluded fishing holes. I decided to get serious about pursuing a wildlife career when I discovered I had a good ear for identifying bird calls and songs to species when I was about 24 years old. My interests are traveling the world, bird-watching, photography, and just being outdoors. My wife, who is also a professional biologist, and I take vacations where we mostly bird and make lists of things we see. We almost always try to hire a local guide when traveling in a foreign country. I'm also interested in the latest politics, church-state issues, evolution, science vs. religion, nature, books, and American history. View all posts by dispatchesfromalowlybiologist

This is a text widget, which allows you to add text or HTML to your sidebar. You can use them to display text, links, images, HTML, or a combination of these. Edit them in the Widget section of the Customizer.
Loading Comments...
%d bloggers like this: